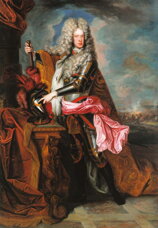 Joseph I. After the death of Leopold I, his son Joseph I ascended the throne in 1705. Joseph I sought to restore monetary conditions before the Rákoci uprising and thus continued to mint according to the norm from r. 1693. Millions of fifteen, six and three-grossed coins of Leopold I circulated in the state, which were enough to cover the needs of average merchants, craftsmen and other users of money.

Under Joseph I, only the most valuable money, ducats and tolars were produced, and on the other hand, the least valuable coins - polishes serving the broadest strata of the population. The coins were produced in the Kremnica and Bratislava mints. The coin system of Joseph I consisted of 10- ducats, 5-ducats, ducats and 1/4ducats, as well as talers, 1/2-taler, kreuzer and others.